Juneteenth is a day that commemorates and celebrates the end of slavery in the United States. Although President Abraham Lincoln signed the Emancipation Proclamation freeing slaves in January 1863, it wasn’t until June 19, 1865, that Union soldiers arrived in Galveston, Texas, with news that the Civil War had ended. It was then that more than 250,000 slaves learned they were free.

Early Juneteenth celebrations included families gathering for music, food, dancing, storytelling and the reading of the Emancipation Proclamation. Juneteenth – also known as Freedom Day, Jubilee Day, Liberation Day and Emancipation Day – symbolizes unity and the promise that all people are equal in the United States.

The following Juneteenth events in Newport News will occur between June 8 and June 19, 2022:

Elementary and middle school students use their artistic talents to express ideas, visions and thoughts about the Juneteenth theme of liberty, freedom, equality, and justice. Visit Grissom Library, Main Street Library, and Pearl Bailey Library to see their work. 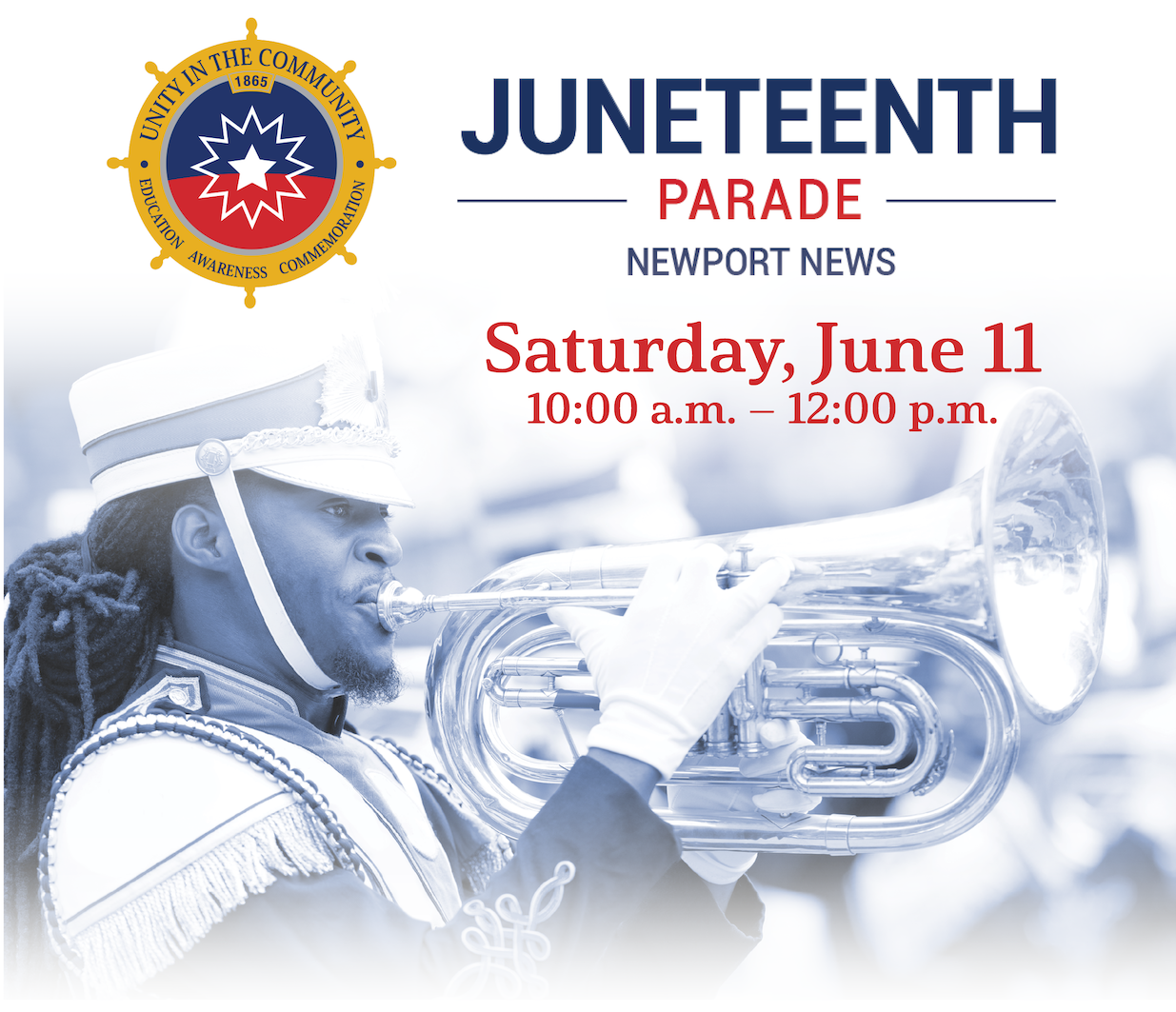 Enjoy the Peninsula’s ONLY Juneteenth community parade! Scheduled for 10 a.m. to noon on Saturday, June 11, the parade starts at Brooks Crossing, near 33rd Street and Jefferson Avenue, and travels 1.5 miles through the Southeast Community, ending at King-Lincoln Park, 600 Jefferson Ave. Here patrons will be able to enjoy food trucks and music from the Mosaic Steel Orchestra.

King-Lincoln Park at 600 Jefferson Ave. will be the site of a special Juneteenth Concert from 5 to 7:30 p.m. Sunday, June 12, featuring live music by the Calvary Chapel Newport News Worship Team, Brothers, and The Fuzz Band. Don’t forget to bring your own lawn chairs or blankets!

Juneteenth Raising of the Flag Ceremony

Dignitaries, guests and the community will gather at City Hall, 2400 Washington Ave., at 1 p.m. Monday, June 13, for the raising of the Juneteenth Flag, along with the reading of a Mayoral Proclamation, General Order #3, and the 13th Amendment.

Learn about Juneteenth and why it’s an important part of U.S. history while having fun playing bingo from 6:30 to 8:30 p.m. Tuesday, June 14, at Brittingham-Midtown Community Center, 570 McLawhorne Drive. Prizes and refreshments will be provided so register today!

Attend a live debate that focuses on two cases and key decisions made by the U.S. Supreme Court regarding racial segregation. Click here to register for the debate, which will feature young people from Newport News. It is scheduled for 6:30 to 8 p.m. Wednesday, June 15, at Denbigh Community Center, 15198 Warwick Blvd.

Listen to oral poetic performances designed for self-expression by local artists and poets on ideas of liberty, freedom, equality, and justice. This event occurs from 7 to 9 p.m. Thursday, June 16, at Downing-Gross Cultural Arts Center, 2410 Wickham Ave. Click here to register.

Juneteenth Mime: The Faces of Freedom

In telling the story of emancipation, silent-movement performers will light up the room through dance and music. This event takes place from 7 to 9 p.m. Friday, June 17, at The Mariners Museum, 100 Museum Drive. Click here to register.

Promoting friendship, unity and team spirit, students from ages 6 to 17 are invited to participate in outdoor sporting games at Riverview Farm Park, 105 City Farm Road, that will bring awareness of the four pillars of commemoration: Liberty, Freedom, Equality, and Justice. Games will be held from 10 a.m. to 2 p.m. Saturday, June 18.

Look through the lens of individuals throughout historical periods as they share their views on how the Emancipation Proclamation changed their lives. This virtual event starts at 7 p.m. Saturday, June 18, and lasts 90 minutes. Residents of Newport View can catch the show on NNTV 48, while others can watch it online at www.nnva.gov/nntv.

In June 2020, Governor Ralph Northam issued an executive order declaring Juneteenth as an official state holiday in Virginia. As such, we invite you to join Newport News for our second-year celebration that encompasses more than a week’s worth of Juneteenth activities. The events are made possible through a partnership between the Downtown Newport News Merchants and Neighbors Association and the City of Newport News.