Our restaurants represent a piece of history for the City of Newport News. Here are 10 stories of 10 restaurants with their origins, fascinating tidbits, and fun facts about the restaurants that call Newport News home.

The very first Bonefish Grill opened in January 2000 in St. Petersburg, FL. Four years later, Michael Cogan opened his own Bonefish Grill in Newport News. Bonefish is known for its seafood-centric menu and its hand-crafted martinis – shaken no less than 20 times. One reviewer on Yelp described her experience having Bonefish Grill cater her event like this: “Mike Cogan, the managing partner, is AMAZING! He takes the time to get to know you and to take on your ideas. Mike catered a large party for us and it was the best food that we could have asked for. Everything was hot, on time, and delicious.” Speaking of Mike, did you know that he ran the half-marathon in the Newport News One City Marathon? It was his goal to run the marathon as a way to recover from surgery. Staff and friends of Bonefish Grill supported him and the event by sponsoring a water station at the crossroads of Boxley and Warwick boulevards.

While Burger Theory is considered a franchise, no two Burger Theories are quite the same. The Newport News location – inside the Holiday Inn Newport News/ Hampton – offers more than 4,000 different combinations of burgers, a hand-picked selection of bourbon and brews, and 10 televisions at its unique wrap-around bar. They also have an outdoor dining space, where you can keep warm even on cool evenings by a fire pit. Burger Theory took Newport News by storm when it opened in 2018. The restaurant prides itself on its relationship with the City, its first responders, locals, and, most importantly, its guests. Upon its opening, Burger Theory brought in a new contender in the ever growing Battle of the Burgers. Recently Burger Theory, along with the Holiday Inn and members of the Newport News Hospitality Association, distributed food supplies to NNHA-member families impacted by COVID-19. The restaurant also oversees the catering inside the Holiday Inn, hosting weddings, business meetings, graduation ceremonies, and other events. 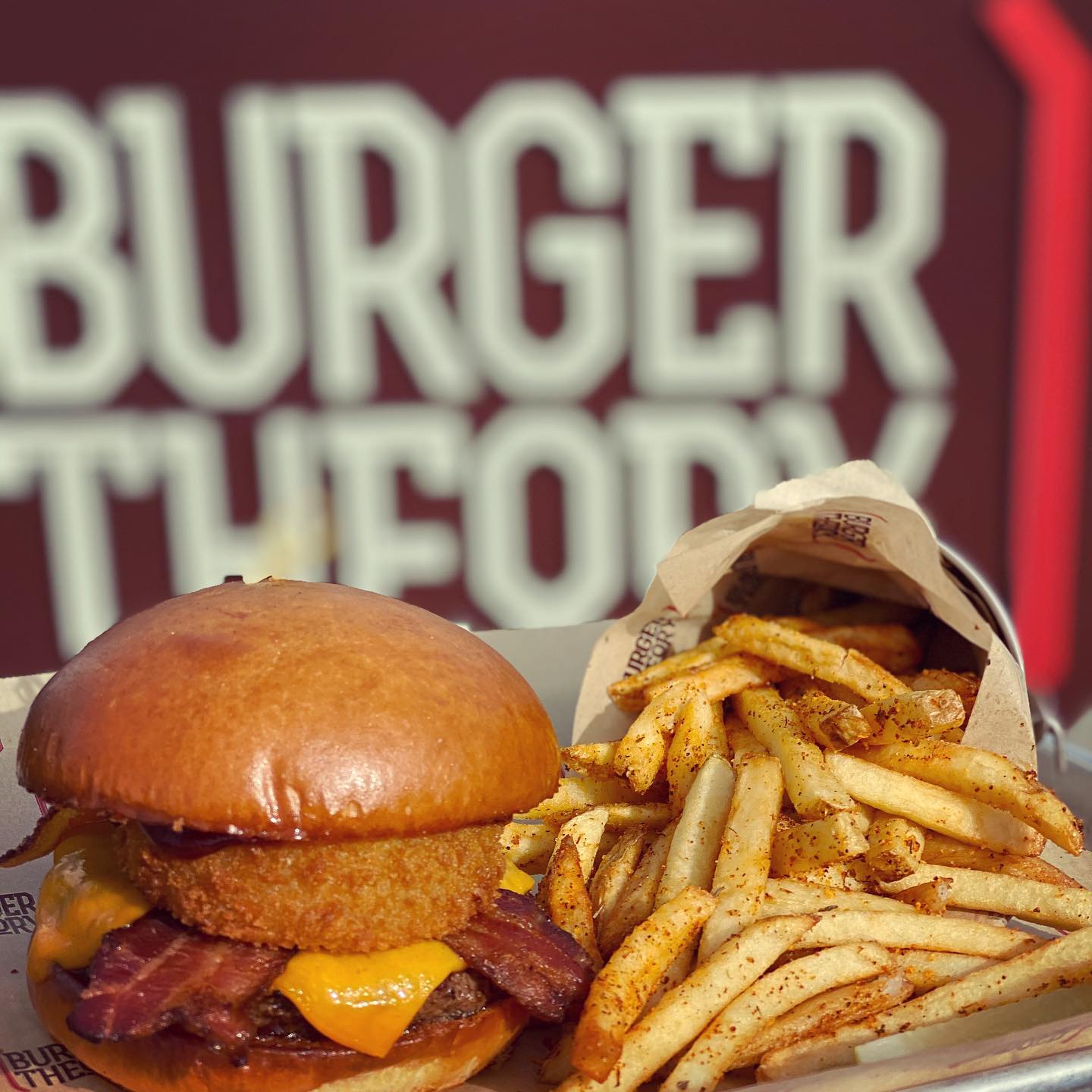 Circa 1918 is located in Hilton Village, an English-style neighborhood built and dedicated in 1918 to house shipyard employees and their families near the end of World War I. Hence its name. The restaurant’s owner and chef, Chad Martin, is constantly updating his menu with new selections, daily specials, and unique chef creations. Last spring, at the beginning of the pandemic, Chad started “Family Style Meals” a weekly promotion found each Wednesday on the restaurant’s Facebook page. These pre-ordered meals feed four people and can be picked up Thursday through Saturday. Past meals have ranged from grilled flank steak, four-cheese orecchiette mac-and-cheese, and roasted broccolini to sous vide grilled lamb and veggie kabobs with baked creamy herbed parmesan risotto. And the best part is the price! It’s only $49 to $59, with options to add dessert or a bottle of wine for an additional cost. For those ready to dine-in, check out their recently renovated restaurant for an entirely new dining experience! 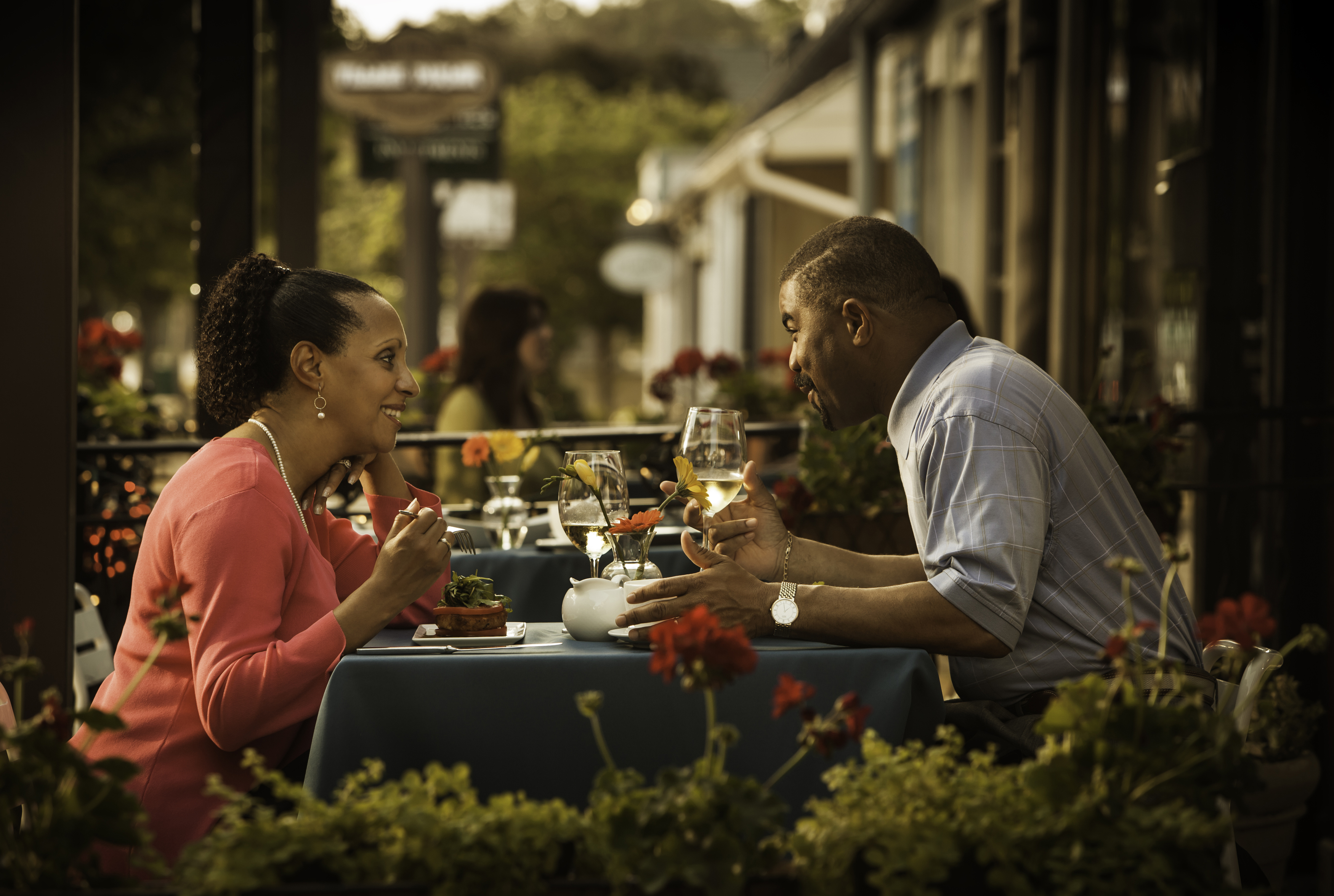 Since 2013 Cove Tavern has been committed to satisfying its customers with great food and excellent service. Their menu and drink selections offer a hint of the tropics, transporting you to your favorite getaway without leaving the Peninsula.  Their dining room is perfect for date nights or dinner with the whole family. And their large outdoor patio is the perfect place to enjoy a meal and cocktail. The COVID19 pandemic has without question taken a toll on all in the restaurant industry but they remain optimistic during these unique times as they prepare to “thrive in the next norm.” With foresight and careful planning, they are learning how to anticipate their guests’ needs. They are fully updating their operational procedures, realigning their menu to consumer preferences by re-thinking their menu structure and overall restaurant aesthetics.

Owner and executive chef, Kenny Sloane, a 2001 graduate of Johnson & Wales University, combines contemporary flare with traditional French cooking. He mixes vegetables grown on his 5-acre Sloane family farm with fish caught offshore and other proteins, providing an unforgettable food experience. She-crab soup, crab cakes, scallops, and Fin’s signature tuna tartare with sriracha ice cream are guest favorites. The atmosphere is chic and effortlessly elegant with an opportunity to watch the hustle-and-bustle happenings in the kitchen through an open window. As busy as Chef Kenny is operating Fin in Newport News, being a father of four, and recently opening a second restaurant in Suffolk, he still finds time to give back to the community. He supports the Virginia Peninsula Foodbank, donates to charity auctions, is guest chef at charity events, and during the pandemic, he has provided meals through the international organization known as the World Central Kitchen. Chef Kenny has said, “I love giving back to the community. They help us, we help them.” 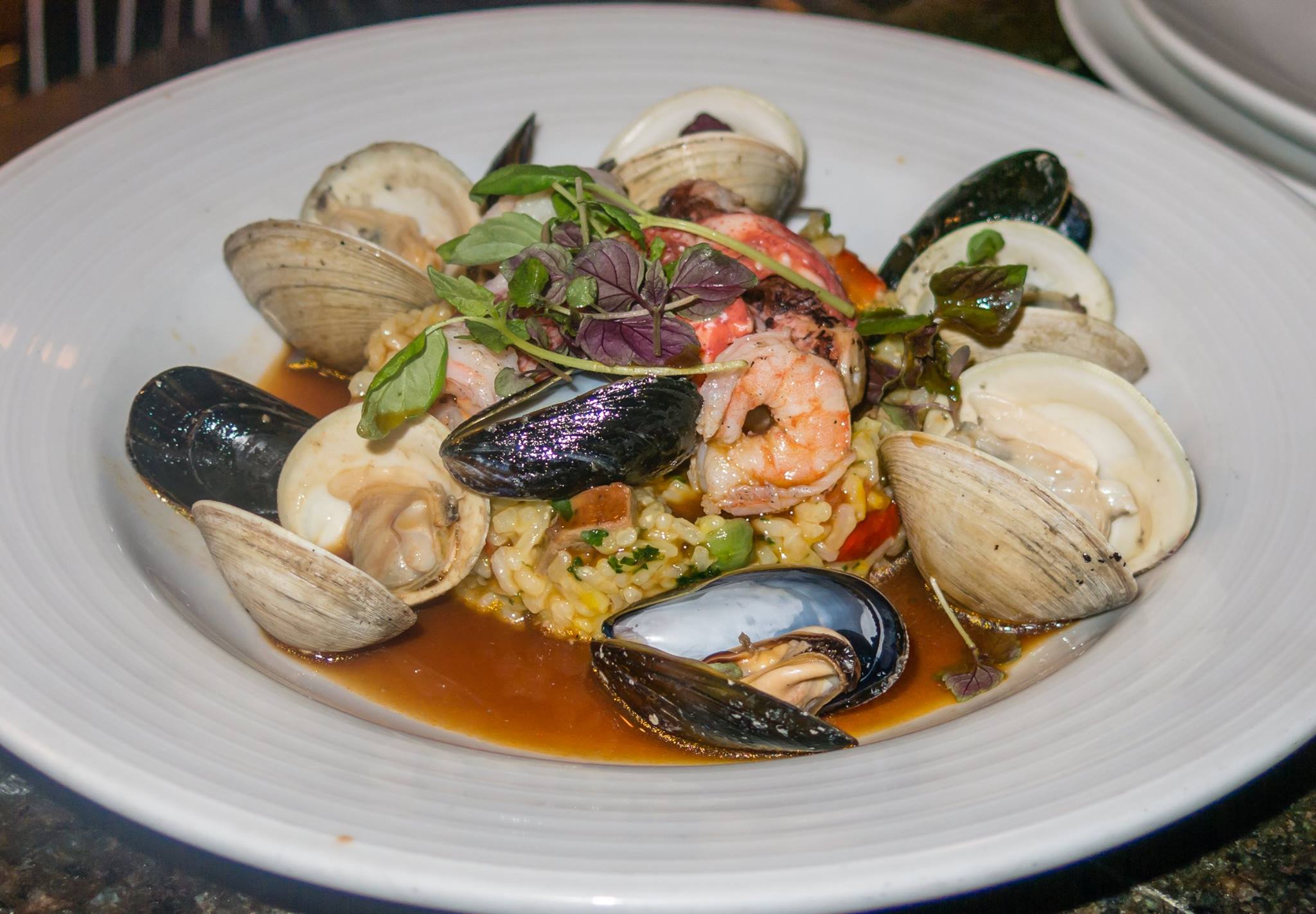 For 22 years, Harpoon Larry’s was a popular seafood restaurant in Hampton. Lucky for us, it moved to Newport News in 2013 after its lease expired on North Armistead Avenue. For almost eight years now, the fish house and oyster bar has made 621 J. Clyde Morris Boulevard its home, the former site of Yukon Steak Co. When it moved from Hampton to Newport News, the restaurant grew from 15 to 40 tables and its bar doubled in size. In a nod to its beginnings in Hampton, oyster shells were brought from the old location to create a decorative wall in the Newport News restaurant. Family owned and operated, Harpoon Larry’s specializes in fresh local seafood delivered straight to its back door. From the cocktail sauce to the desserts, everything on the menu is made in-house. Their oyster list showcases eclectic selections from Canada, the east and west coasts of the United States, and a wide variety from the Chesapeake Bay region.

The owner of Hayashi Sushi & Grill, Lenny Sean, moved to the United States from South Korea in 1983 when he was 17 years old. After graduating from Denbigh High School, he attended college in Florida. Sean spent his early years working in restaurants and learning about Japanese cuisine, so he decided in 1997 to open his first restaurant, called Hayashi Ramen & Grill, in Williamsburg. Ten years later, he opened Hayashi Sushi & Grill in City Center at Oyster Point. Hayashi features a hibachi grill, sushi bar, and a traditional sit-down restaurant, along with a large bar and an outdoor seating area. It is important to Sean to give back to the community so he regularly contributes to local fundraisers, such as the March of Dimes, the Virginia Peninsula Food Bank, and the American Cancer Society. Last year, Hayashi Sushi & Grill won gold in the Virginia Media's 2020 Best of Contest in the category of “Japanese Restaurant/Sushi” restaurants in Newport News.

NEST Kitchen & Taphouse reflects both the community in which it is located and the uniqueness of the fare it offers. In contemplating what its name represents, the word “NEST” is both a noun and a verb. It is at the same time a place in which to be comfortable — as in at home in one’s own community — and the very action of getting situated in whatever manner best suits your desires. “All craft, all day, from breakfast to beer” is representative of the experience sophisticated diners and craft beer enthusiasts can find at NEST. And now, after cultivating an enthusiastic breakfast, lunch, and dinner following, they have incorporated brunch daily until 4 p.m. Their “Clean Eats” and vegan offerings provide an opportunity for true foodies to explore an ever-expanding variety of menu items. Guests at NEST can always count on unique, scratch-made food and a tremendous craft beer selection. Diners are invited to enjoy NEST both indoors and on their patio. Prefer to “NEST" at home? They’ve got you covered with NEST To-Go. 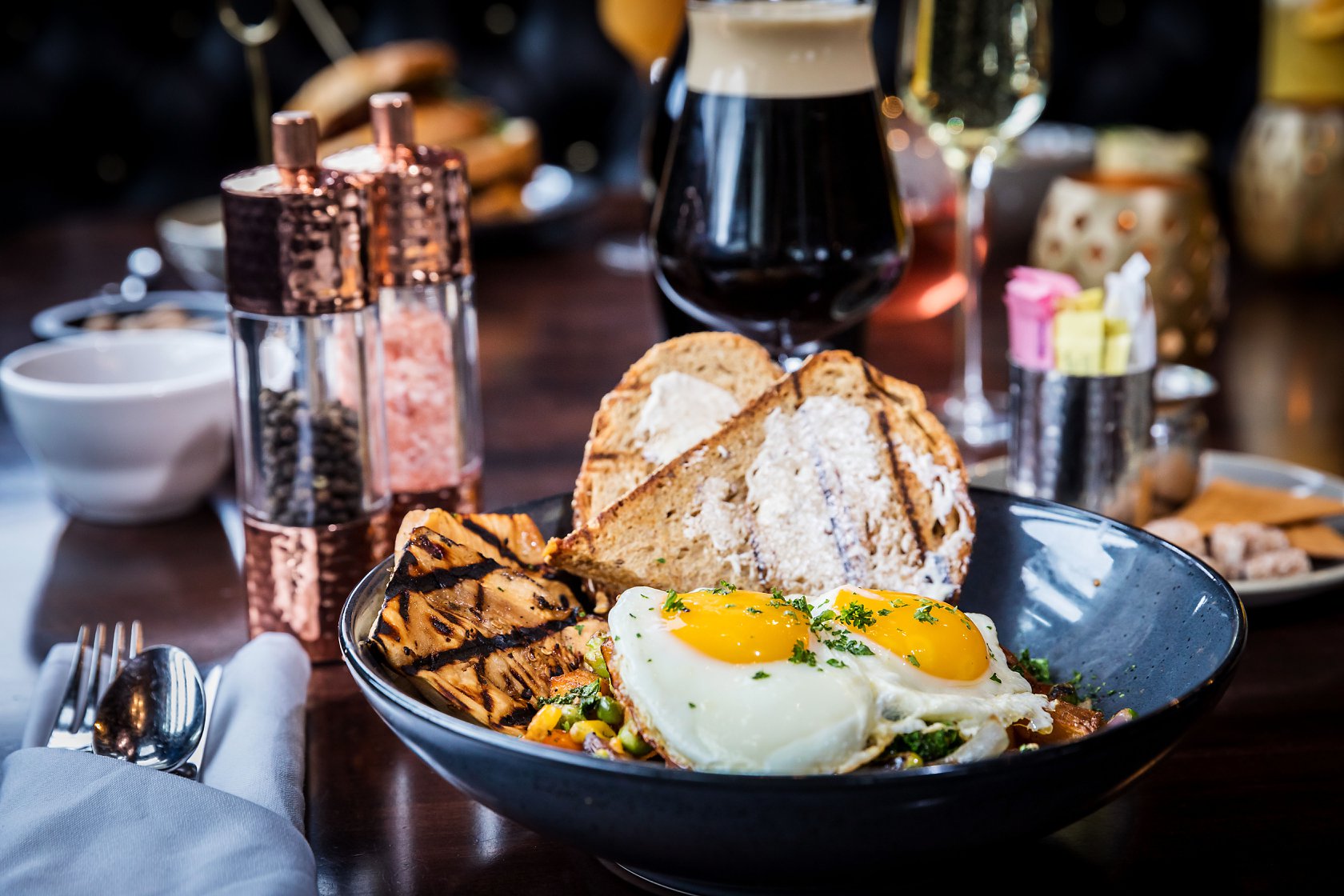 With locations in Newport News and Virginia Beach, Anderson's Garden Center is a third-generation, family-owned business that first opened in 1958 as a simple roadside stand selling orchids. Since their founding, the garden center has been family-owned and operated. Today, it’s a popular destination for shopping and dining. In late November 1988, an expansion made room for the opening of the “Showplace Café,” a small eatery with four tables set up in what had been the silk floral department. In 2006, the café was remodeled and fashioned after garden centers in Europe where people linger, socialize, and dine. In 2016, a second location was opened in Virginia Beach, and both restaurants were re-named Sage Kitchen at Anderson’s. The Newport News eatery can serve up to 175 people. Sage Kitchen uses as many local ingredients as possible. They have been “farm-to-table” since 1998. Choose from home-baked breads and homemade soups, bowls, sandwiches and salads. And have you tried their chicken salad? Well, if you haven’t, it’s time you do! 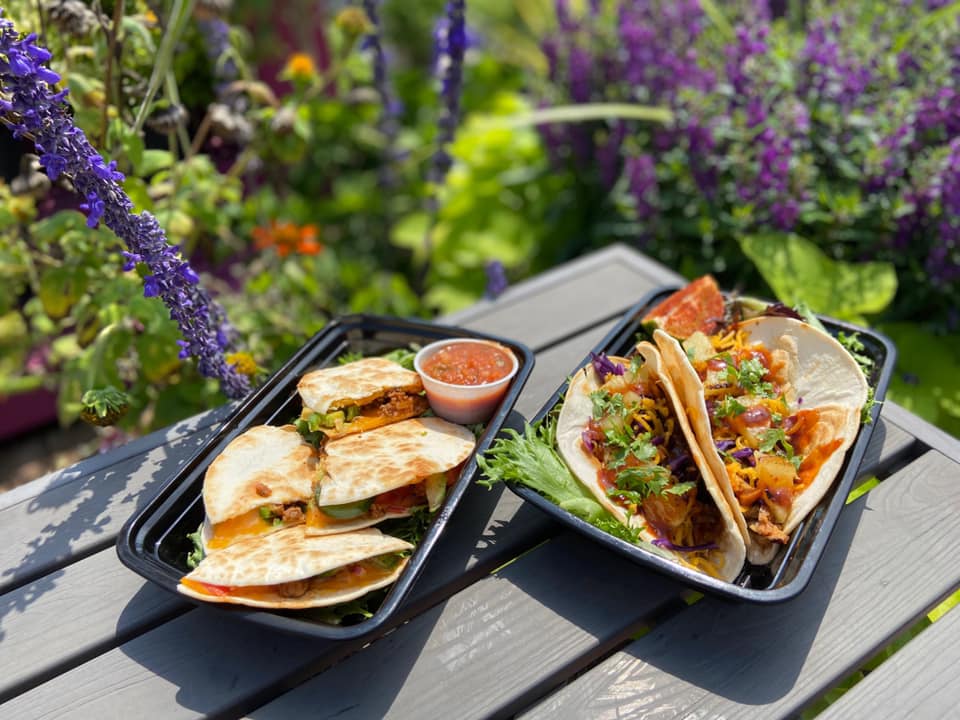 Schlesinger’s is named for Pulitzer Prize-winning author Arthur Meier Schlesinger, Jr. Most notably, Schlesinger served as special assistant and historian to President John F. Kennedy from 1961 to 1963. He detailed his years with the Kennedy administration, from the 1960 presidential campaign to the president’s state funeral, in “A Thousand Days: John F. Kennedy in the White House,” which won the 1966 Pulitzer Prize for biography. Schlesinger visited the restaurant in Port Warwick about a year prior to his passing and enjoyed some time with its founder, Steve Lewis. Throughout the restaurant, diners will find style influences of Arthur Schlesinger in its decor.  In museum-style wall alcoves, antique typewriters and various bowties pay homage to the man, his career, and his style.  The restaurant staff also wears bowties in honor of Schlesinger’s dapper tradition. Images of old-fashioned typeset and round-wire spectacles pepper the restaurant’s print materials and gift cards. If you look closely, you will see intentional copy editor’s marks in their menu and logo, harkening back to the career of the celebrated writer and historian. 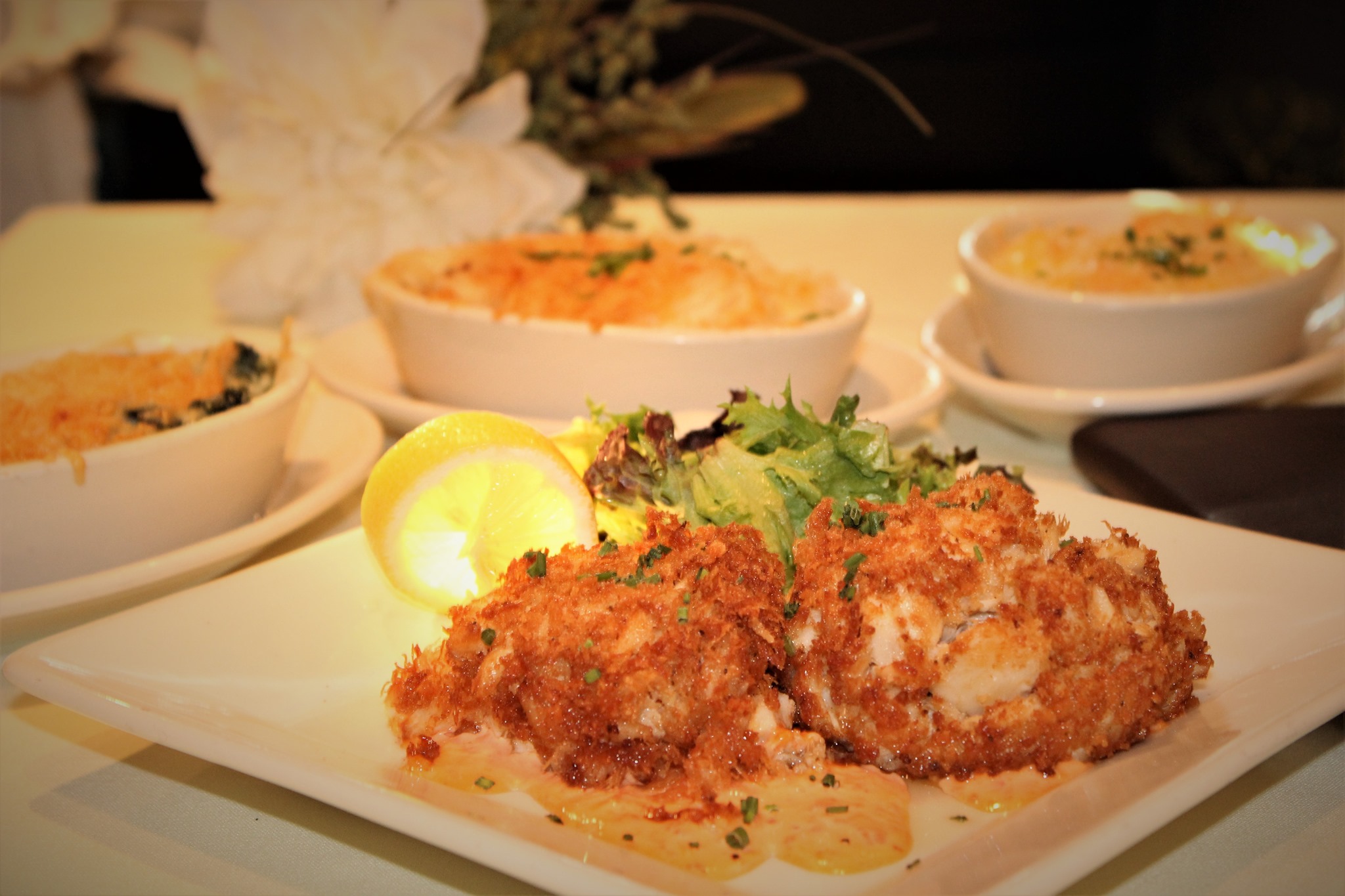